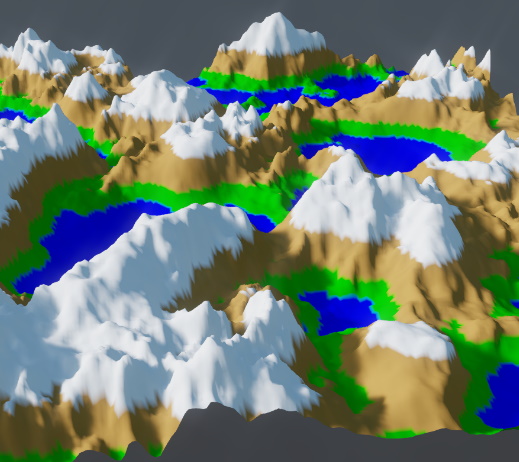 This release is a great step forward towards making the engine better to build awesome games!

Prefabs allow you to reuse assets and build game more efficiently. Particles are a critical requirement for many immersive games, and are now part of the engine with full editor support.

Lastly, we have done a full rewrite of our graphics engine, paving the road for better performance and scalability. We can’t wait to add many new rendering features on top of it! As a bonus, we included our experimental Direct3D 12 renderer.

Prefabs allow you to assemble entities into building blocks and easily reuse them in any of your scenes. Changes to your prefabs will be reflected on all instances (as long as properties are not overridden).

We even took the concept one step further to empower our users, by having prefabs within prefabs, as well as the possibility to use only part of a prefab when you instantiate it. And of course, removing or rearranging a few entities won’t break your prefab synchronization!

You can now use any asset as an archetype for another asset. When you change a property of the archetype, the new value will be automatically propagated to all the derived assets, unless you specifically override them. Archetypes can be used with most asset types.

You can now create and edit particle systems directly in the Xenko Game Studio. Particles are deeply integrated in the game engine and leverage the powerful effect system and its high level of customization.

While there are still several features on the roadmap, the current implementation is sufficient for most games. The ability to customize almost all aspects of the particle engine allows you to add features tailored to your game’s specific needs.

The particle engine supports many features out of the box:

All aspects of particle systems are broken down into individuals modules like spawners, initializers and updaters, and each of these modules is easily tweakable and customizable. Check out the samples and the Xenko documentation for a detailed walkthrough.

The Game Studio now also comes with a built-in curve editor. For now only the particle engine uses curve animation. In the future, it will also power our property animation system and our storyboard system.

Most of our graphics pipeline, both low-, medium- and high-level, has been almost completely rewritten, and should be ready for the future.

The low-level API has been changed to more closely resemble DirectX 12 and Vulkan. For a list of breaking changes, please see below.

The high-level pipeline has been completely reworked, to achieve the following goals, most of which we will tackle in the upcoming releases:

Stay tuned for technical details and performance evaluation in the near future!

Direct3D 12 has been added as a new build target. While still experimental, it already supports all parts of our rendering pipeline.

You can try it by changing the ‘Preferred Graphics Platform’ in the ‘Rendering Settings’ of your ‘Game Settings’ asset.

Our OpenGL renderer has been improved and should behave much better (shadows, PBR, etc.). Also, we now deliver OpenGL and OpenGL ES on Windows as build targets.

You can also try them by changing the ‘Preferred Graphics Platform’ in the ‘Rendering Settings’ of your ‘Game Settings’ asset.

So far, there could only be one component per type on an Entity. This was quite cumbersome, especially for scripts, which had to be stored inside the ScriptComponent.Scripts list. It also resulted in many special cases to make them work in the editor (i.e. references between scripts, assembly reloading, etc.).

Now multiple components of a type are allowed. This affects scripts and physics components, and can be used for custom components for which more than one instance is sensible.

We hope this makes your life easier!

We added a simple event system that will allow your script to easily communicate with each other. Check out the EventKey<> and EventReceiver<> classes. You can create an EventKey from your sender scripts and consume events using EventReceiver from other scripts.

The Game Settings asset has been improved: You can now have different settings depending on the platform or GPU.

For example, you might want to set different off-screen resolutions for your game on Android depending on the GPU model. Or you could use one of our new Direct3D12, OpenGL or OpenGL ES renderers on Windows.

Simply open your older projects with new version of GameStudio. It will probably fail to compile your assemblies since API changed little bit, but you can still continue.

Then, save back your project in GameStudio. You now can open your project with VIsual Studio and try to fix your game code with latest API changes.