After nearly two years of open beta, we’re proud to announce that Xenko is now available as a commercial product. Xenko 2.0 adds features such as full VR support, a pipeline rendering editor, light probes, and scene streaming management, along with greatly improved stability (more details below).

We’d like to thank all our beta users for their feedback, which helped us improve Xenko immeasurably over the last two years. We couldn’t have done it without you!

Xenko remains free for individual users, small studios, and educational purposes. It will be available to larger businesses through a monthly subscription.

Pricing for Xenko is broken into four tiers:

While the Xenko runtime source code remains open to everyone, the Game Studio source code is only available in the Pro Plus and Custom tiers. Personal and Pro users will be able to extend Game Studio via a plug-in system available later this year.

Xenko Personal is not available to non-profit organizations and companies with yearly income above $200k. Additionally, Xenko Personal users must display a “Made with Xenko” splash screen in their applications.

For more information about the pricing plan, see the official website page

To give everybody a chance to check out Xenko 2.0, Xenko Pro is free until December 31st 2017.

During this period, you can use Xenko without creating a Xenko account and the Pro Plus version will be available only by contacting the Xenko team.

The Xenko Store opens on January 1st. From that date, Xenko Pro users must purchase a subscription, or switch to the Xenko Personal subscription if they’re eligible. The Xenko Pro Plus plan will also be available to buy from the online store.

For more information about the welcome campaign, see the official website page.

No need to make your game open-source

From Xenko 2.0, all Xenko users (on any tier) can modify the source code and recompile the engine without having to open the codebase of their game. You can also redistribute modified Xenko source code to other Xenko licensees having access to the same plan as you.

What about the beta versions?

Beta Xenko versions will remain available for now under the same conditions as before, but will no longer receive updates. We’ll remove the beta versions at some point, so we encourage you to switch to Xenko 2.0. Remember that Xenko is free for individuals and small businesses.

Working with scenes has become more flexible. Instead of a single scene, your game can now use a hierarchy of scenes to organize entities into levels, areas or layers, and let teams collaborate on them more efficiently.

Game Studio displays child scenes together with their parent. Individual scenes can be loaded, unload, locked and moved around.

When running your game, the default scene set in your game settings is loaded as the root scene and can be used to store persistent entities. More scenes can be dynamically loaded and unloaded from scripts and added as child scenes.

To get started, take a look at the new built-in SceneStreamingScript. It demonstrates background scene loading when passing through trigger volumes.

You can now use a scene’s Offset to move its entities both at design time and runtime.

The ChildSceneComponent has been removed. We encourage all entities to be managed by a single entity manager and rendered by a single graphics compositor.

Enabling VR is now as simple as a single click!

Xenko comes with a VR game sample that shows you how to implement VR gameplay, including environment interaction and teleportation:

Save valuable time by visualizing and testing VR directly from the scene editor:

Light probes capture the lighting at the position you place them. They simulate indirect light, the effect of light bouncing off surfaces and illuminating other surfaces.

They can make a dramatic difference to the mood and appearance of your scene.

Light probes can be placed freely and are processed per pixel. This means you can use them not only on small dynamic objects, but also large or static objects (until we have light maps for those!).

Last but not least, you can now very easily capture a DDS cubemap from current camera position in editor, for use as a diffuse or specular skybox light.

Our implementation uses ray-marching rather than post effects, making the shaft visible and cool-looking even if the light source isn’t visible.

The graphics compositor is now a separate asset.

Rendering parameters (such as VR) and post effect parameters can be tweaked in just a few clicks. 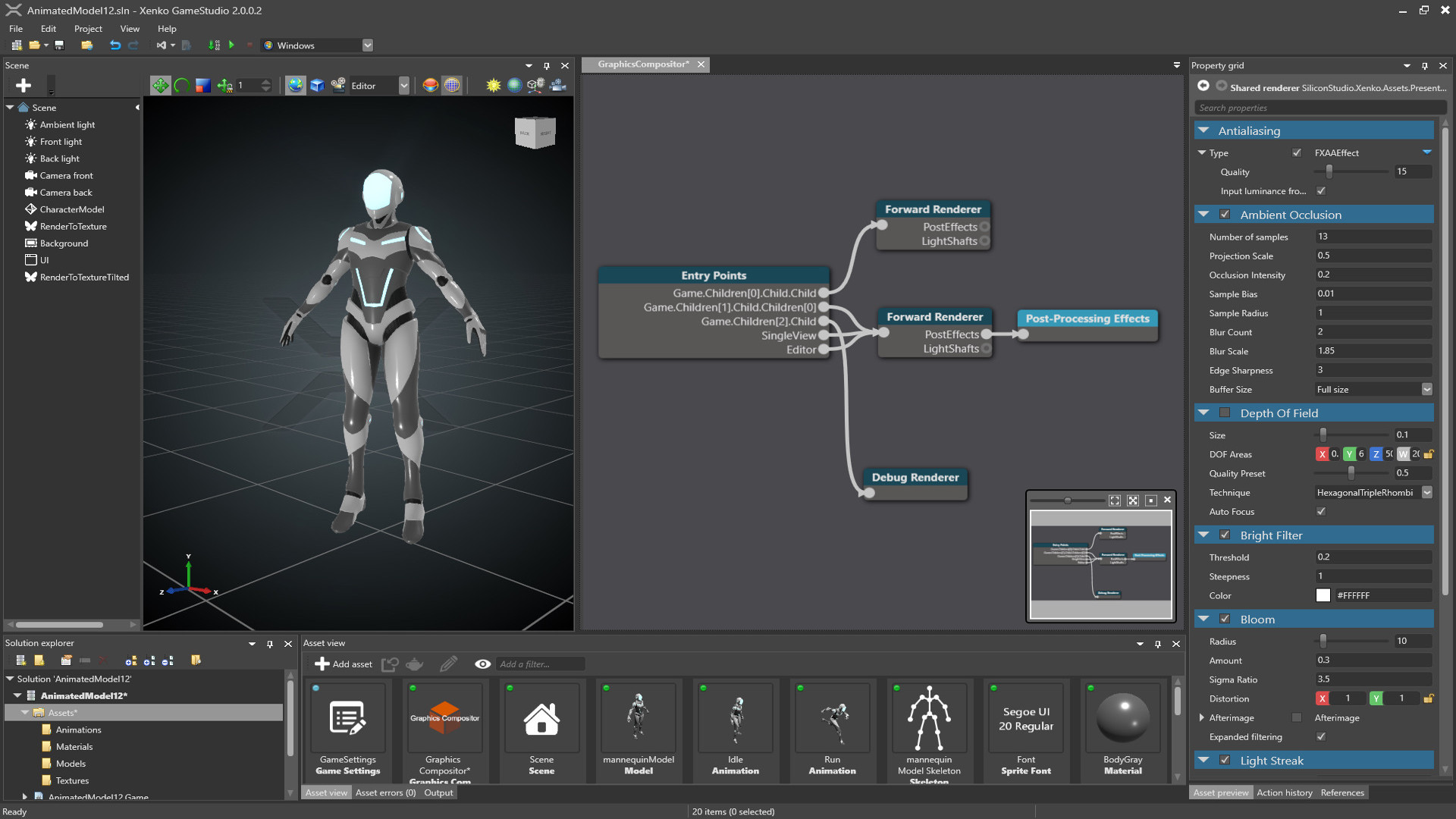 This is just the first step towards making the graphics compositor easy to customize and extend. Stay tuned for more changes in future releases!

We now have full support for Visual Studio 2017!

Programmers working with Xenko often go back and forth between Game Studio and Visual Studio. To make their lives easier, we made a few key improvements to the Xenko Visual Studio extension:

Also, our whole build infrastructure and script editor is now based on the latest version of MSBuild 2017 and Roslyn. Supporting the new VS2017 Project System with .NET Standard is just a few steps away!

In order to provide a better experience for users, we’ve been working hard on various fronts to make the editor smoother and more responsive. This is still a work in progress and expect regular progress.

Also, package size has been almost divided by 3, resulting in much faster download and install time.

For the full release notes, see the dedicated page.